How to interpret your Vector Coaching Plan

Below are both sides of the Vector Card (they can be purchased here) The Vector cards are a thin, credit-card sized depiction of the Vector Coaching Model.  They fit in a wallet, can be written on, and are a useful way to explain the Values-centered Leadership® philosophy to the person with whom you are working as a coach or leader. 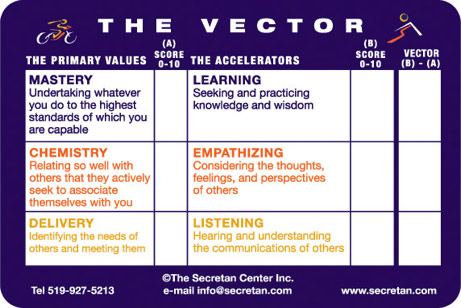 These Vector Cards are available for $1.00 each – click on the cards

Guidelines for using this Coaching Tool (see sample below)

The Vector is a forward indicator. Most coaching and leadership development tools provide snapshots of history, looking back over six or 12 months (backward indicator). On the other hand, the Vector takes account of the current situation, recognizing that the current situation is simply the result of the past, and, at the same time, acknowledges that we are equally interested in the future. A positive Vector suggests that you are growing this PRIMARY VALUE and that current levels of the Accelerator (Learning, for example) will lead to the realization of your Primary Value (Mastery, for example). Equally, a negative Vector predicts a future decline of the PRIMARY VALUE being measured due to the current, insufficient level of Learning. In your Vector Coaching Plan, positive Vector numbers in the right-hand column indicate that you are investing in the Primary Value with which it is associated.  Conversely, negative Vector numbers indicate that more investment in that Accelerator will be required in order to achieve a higher level of the PRIMARY VALUE with which it is associated.

Below is a graphic which shows your aspirations, and the gap between today and where you would like to be – your Vector Coaching Plan. Use it independently, or with your coach, to align your actions and your life with your dreams and aspirations.