This is the third in a four-part series titled, “Why It is so Hard to Change”.

The Copyfrog Effect: How often have you sat in a meeting and listened to someone proposing an idea that you considered fatuous, while you remained silent? 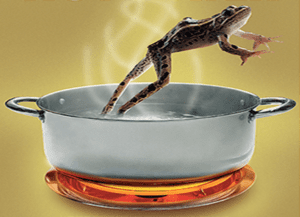 When we do this, we remain part of the silent, and therefore invisible, majority, knowing deep inside that we are living a lie, but afraid to step out and say so. An old, but false, urban legend helps to illustrate what can happen to us if we fail to be courageous by challenging the status quo, or the perceived attitudes and opinions of others.

According to the legend if you drop a frog into a pot of hot water it will quickly jump out, but if you drop the frog in a pot of cold water and gradually raise the temperature, the frog will not react to the rising heat and will eventually cook to death. You might expect that the frog would say, “Hey! Something is wrong here, let’s check this out – in fact let’s check out of this pot!” But the frog is either too embarrassed to say anything or doesn’t notice the changing environment until it’s too late. Like the frog, we are often too busy and too distracted to analyze situations objectively and thoroughly, or to pay attention to the changing ideas and conditions around us with open minds. Our failure to do so results, at best, in missed opportunities, and at worst, in our demise. Thus we remain on the trailing edge rather than the leading edge of innovation, effectiveness, performance and relationships.

Another metaphorical animal is the copycat: someone who copies the words or behavior of another. Join these two critters together and we have a Copyfrog – someone who is afraid to speak up for fear of ridicule or feeling alone, or appearing not to be a team player, even though many others on the team may feel the same way, and are just as afraid to speak out as you are. The result is that we copy the perceived (but not the real) beliefs of others – we copy others who are copying us! The Copyfrog Effect causes us to perpetuate, and inadvertently endorse, the existing paradigm because, though it is being questioned silently by many, it outwardly appears to us as though we are the only ones doing so – what Leslie Perlow (When You Say Yes but Mean No: How Silencing Conflict Wrecks Relationships and Companies… and What You Can Do About It,)  has called the “vicious spiral of silence”.  Irving Janis described this pattern in his book, Groupthink, a classic of social psychology based on the idea that people in groups tend to think differently, and by implication, less effectively than they would have thought as individuals on the same issue at the same time.

With this misunderstanding, a paradox occurs: we march in lock-step, supporting an obsolete or unpopular paradigm with which we don’t agree. This is how unpopular wars begin, poor decisions get made, and superior strategy is degraded. It’s the source of broken relationships and dysfunctional teams.  And because authentic conversations are difficult in these conditions, it is a key reason why change is resisted.

This week, when you find your self presented with ideas, policies, proposals, recommendations, or decisions that run against the grain for you, muster your courage – raise your voice (in an inspiring way) and seek to understand and improve on what you heard. Choose to avoid becoming a Copyfrog.