For several years our lar 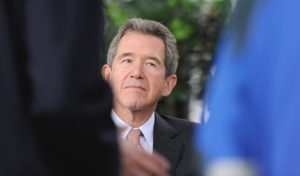 gest client was BP. At the time, John Brown was the CEO. Of all the leaders that I have known over the years, John Brown stands out as one of the most visionary, insightful and prescient talent builders of the last 50 years. Had he remained CEO of BP, I think the entire energy sector would be enormously different today – in a good way. He helped to build a company that generated $28 billion (yes you read that right) in profits. He put a stake in the ground and declared that BP no longer stood for “British Petroleum” but now stood for “Beyond Petroleum”, marking the beginning of a 10 year journey in which BP would shed its dependency on fossil fuels.  This was  underscored by a ground-breaking speech at Stanford University in 1997, during which he made his position clear that the link between man-made carbon emissions and global warming could no longer be dismissed, (remember, he was the leader of the second biggest energy company in the world) and he called for immediate action. As a result, he alone in the energy sector, was predicting what we now know to be true, while his peers derided him. Along the way BP acquired Amoco, became the largest producer of solar energy equipment in the world, and grew to become second only in size to ExxonMobil.

Like any outstanding leader, especially a risk taker in the high-stakes energy industry, there were slip-ups and mistakes. The most critical one, in some ways, was his decision to lie in a witness statement about his homosexual relationship with another man. He was hounded by the press for this, and this sad but strategically insignificant event, as much as anything, brought about his resignation months prior to his planned retirement.

John Brown helped to shape the future of the energy industry and today it is catching up with him.

BP is still a huge and powerful corporation in the energy sector. But it is a shadow of its former pioneering and visionary self. So now we need to ask, what are the criteria by which we judge a leader? Where, and when, does the personal life and decisions of a leader become the strategic priority of the board and shareholders? Should the opinions of those who subject leaders to their own benchmark of moral rectitude, make decisions based on their own moral compass but which are enormously detrimental to the future success of the business? After all, the board’s main responsibility is to the shareholders of the organization.

I offer no judgment here, but I present for you a question that faces all boards. In the case of BP, a subjective decision based on the personal life of one individual changed the fortunes of millions of people around the world – customers, employees, shareholders, governments, explorers, regulators and everyone who hoped that BP would model the way forward for sustainable corporations.

Was it the right decision?  What do you think? What would you do?